Home/Ashtray on a Motorbike/Top piss taker, song writer and dear old friend of mine…
Previous Next

When 1965 arrived I had been thumping out bass lines to “Smokestack Lightning” and “Spoon Full” with “The Howlin Blues” – we had nailed a residency at Newcastle’s Club Agogo (well almost a residency, every other Monday night in the under 18’s Young-Set lounge). The Animals had already hit the pop charts with “House of the Rising Sun” and there was always a little room for another wannabe blues band in the stable of Mike Jeffreys and Myer Thomas, especially one that was prepared to perform for free!

We had this road manager called Bob Coe, not so much a road manager as much as a local guy with a Leyland van covered in lipstick messages of “Love” from supposedly idolatrous female fans (probably scrawled on by Bob himself with his mother’s lippy when the band weren’t looking!!). Bob roadied, (correction) drove the van for two bands The Berries and our selves The Howlin Blues. Due to our lead singer and harmonica player Ernie Bell’s endless infidelities with the Howlin Blues’ regular guitarist’s girlfriend we were always borrowing other bands guitarists for our gigs, namely Dougie Tate of The Berries and also Alan Hull (from the school of ultimate piss takers). 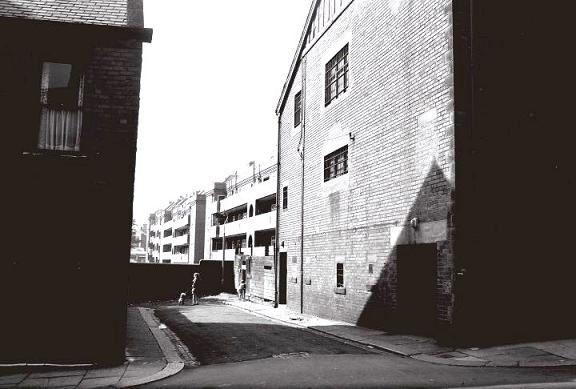 Sutton’s Dwelling’s – View from Ethel Street, Benwell – On right the back of the Adelaide Picture Hall and flea pit.

We’d pick Alan up from his mother’s flat in Sutton’s Dwellings and patiently wait in the Leyland parked on Elswick Road – “Brace yourself here he comes! If he instantly tells you you’re a cunt for not giving him the front seat just ignore him this time – he should buy himself his own guitar anyway!” said the drummer Davey Whittaker. We were beginning to get used to Alan’s instant piss taking, a kind of defence mechanism I guess – always in there with a cutting remark that sometimes just went totally over our vacant, secondary modern school educated heads.

I always remember Alan looking rather straight in the early days, very short hair dabbed with a touch of Brylcream and an old black leather jacket was his token style accessory. I guess unlike all of us around him who were spending all our hard earned cash on checked hipsters, afghan coats and kaftans, not to mention paying the hire purchase on our musical instruments and amplifiers, Alan was much more interested in blowing his pocket money on Guinness and Woodbines and just frequenting as many public houses as possible. 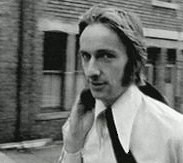 He would get on stage with a borrowed guitar without any rehearsal and start playing along to whatever tune we had decided to totally bastardise in the name of the blues! Luckily everything was in twelve bar format and usually in the key of E so he didn’t usually go wrong, well at least fifty percent of the time he could follow it! Ha Ha! Our Howlin Blues gigs took us all over the north east of England to Carlisle – up to the Scottish border and south to North Yorkshire. Mainly pubs that smelled like toilets with sticky carpets, social clubs with the odd holiday camp and college gig thrown in for good measure – they all paid the going rate for the usual smart, be suited good looking pop group performing the top twenty hit parade songs of the time – Unfortunately we’d stand there looking like tramps on acid playing John Lee Hooker songs to punters who yelled back in our direction “Give us some Cliff and the Shadows” – we usually just ignored the hecklers – what did they know about the Blues – I suppose at that time probably not much less than we did actually!! 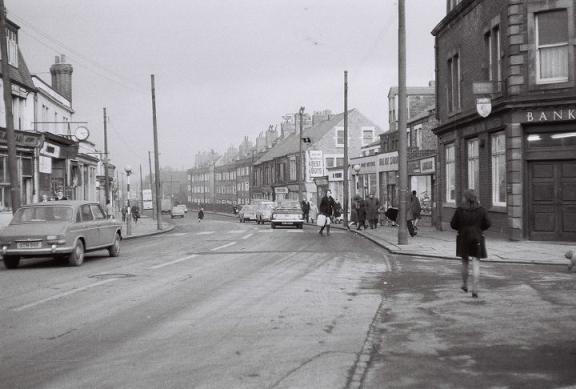 Alan was also gigging with The Chosen Few – Tommy Jackman on Drums, Rod (I love a Vindaloo curry) Hudd on lead vocals, Alan (Bumper) Brown on bass, and Mickey Gallagher (later of ‘Ian Dury and The Blockheads’ fame) on Honer clavinet. Alan was really at home here writing his Beatle-esque songs along with the Chosen Few’s Tamla Motown cover versions. That band was something potentially very special in those days but I always felt that the band themselves could not see it – mutual bass playing friend and roadie Terry Morgan and their manager Bill Keith were always up for going through “hell and high water” to keep them on the “straight and narrow” but more than often (with the exception of the mild mannered Bumper Brown) they just acted like a bunch of irresponsible piss heads.

Eventually, those around them who gave their support inevitably disappeared into the opposite direction. I remember Bill Keith and the band being pulled over for breaking the speed limit by 200 miles an hour up the northbound A1 to make a gig on time – It had taken Bill hours of searching every pub on Tyneside to find them and remind them that they were actually due on-stage in less than one hour in a venue situated just south of the outer Hebrides!

When the local constabulary of Morpeth stated that they didn’t give a damn about The Chosen Ones, Bill told them to f**k off, leave them alone and go swivel! – The police car (I seem to remember an old Riley) gave frantic chase to the Few’s van all the way to the said venue and arrested Bill for slander and ABH; the rest of the band, thinking the whole episode was a huge joke just made a bee-line for the club’s bar counter to continue their ongoing drinking session; As usual leaving Bumper Brown and Terry Morgan to carry in, set up and sound check their amplification ready for them to stagger on stage at some time in the future and enthral another room full of oddballs from The Twilight Zone.

We’d all play our bread and butter social club gigs on Friday and Saturday nights and then make a bee-line to Wallsend to jam into the early hours at The Manhole Club. The Man Hole Club, named after the actual manhole cover that was embedded in the front door step of the Wallsend Bingo Hall, was situated in the basement and Dave Wood’s ‘Impulse’ recording studio was established around the same time on the first and second floor. The Man Hole, literally a damp and smelly old Victorian basement that looked like it had never seen a coat of ‘Whitewash’ since 1880, would always start to rock around midnight through till the first early morning Atlantian bus ran from Wallsend to West Denton!

A cupboard at the bottom of the stairs housed a portable cooking ring where Keith Crombie fried the living daylights out of rotten eggs, slapped them between two slices of mouldy “Mother’s Pride” and flogged them to every drunken and stoned teenager that descended the old stone stairs – Botulism and great live pop music ruled!

“Where the fucks Hully!” shouted a very pissed Rod Hudd as Ernie Bell and myself wandered into the club after a laborious gig to a bunch or normal’s at The Milvain Social Club. Bumper Brown stood silent as he gave the gent’s urinal a quick splash. ‘Bumper have you seen Hully?’ enquired Hudd, sliding into the quagmire and ending up flat on his back onto several weeks of urine, regurgitated Keith Crombie egg sandwiches and fag ends on the toilet floor. Rod looked not unlike the great unwashed at the best of times but now smelled like an abattoir on open day and resembled the “Thing” clambering out from whatever lagoon it was?

Tommy Jackman and Mickey Gallagher rehearsed a couple of sections of “I Won’t Be Round You Anymore” awaiting the other three to put in an appearance on stage – I use the word stage lightly – It was more like six beer crates and the usual 8×4 sheet of block board stolen from the local building site after closing time.

Eventually at 1.0 am the room was packed and thick with the smell of marijuana, sweaty bodies and the band with Bumper’s deep foundation were grooving and creating a magic that only they could, but unfortunately only they themselves just could not recognise – I vividly remember like it was yesterday playing in that little live music basement on and off for the best part of two years and that, I now find hard to believe was over forty years ago, another time when we were all on this musical mortal coil together!

1967 came and Alan was now chasing us for a change, ‘Us’ being The Tenth Avenue All Stars” – an eight piece line-up of drums / bass / tuba and trombone / banjo / guitar / organ / lead singer and a three piece Dixieland influenced brass section. They were the Dalton brothers from Throckley. The Dalton Brothers were the meanest horn players on Tyneside at the time – they had played with their father’s family band until they reached their late teens, and were exceptional soloists playing Dixieland and traditional jazz as well as rock.

It was at this time I found myself taking to the bass fiddle and thumping out ‘Tiger Rag’ and ‘Dark Town Strutters Ball’ at the New Orleans Jazz Club two nights a week, and then doing rhythm and blues clubs with Ernie Bell. This, sadly, didn’t last long. Ernie quit and that’s when we became ‘The Tenth Avenue All Stars,’ a soul ‘n’ blues – rock ‘n’ jazz- pop ‘n’ comedy – pie ‘n’ peas pudding band making quite a name for itself on Tyneside.

The Tenth Avenue All Stars were very unique in as much as we played Tamla Motown covers alongside “Tiger Rag” “Dark Town Strutter’s Ball” and many other Dixieland jazz standards – We did manage to achieve a very rootsy and real vibe with trombone, clarinet, and trumpet at the fore – The Daltons were streets ahead of most other young brass players of that era and Alan knew it. He wanted us to be his backing band and give his songs a Geordie New Orleans feel; can you imagine that?

I thought it was a great idea at the time but the Daltons were much more into their socialist values and equally wanted Alan to sing-a-long “Dark Town Strutter’s Ball” which he obviously thought was old hat – unfortunately neither side could see the huge potential of that creative marriage at the time – we may have ended up as Lindisfarne with a banjo and trombone (funny!!!) – Maybe not?