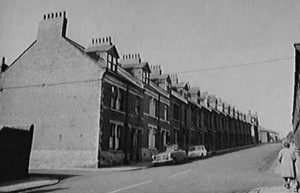 Caroline Street – Photograph taken in the 1960’s from Armstrong Road

March 1949 – 1953 – I lived at 24 Caroline Street with my mother and grandparents in a big back to back Victorian terrace with washing lines religiously stretched across the back lane, sporting all kinds of ancient grannies’ linen bloomers and pillow cases, just awaiting the coal man’s filthy wagon to drive down and cause havoc.

I was 4 years old – There was talk of us moving to a home of our own – no longer living with Granny and Granddad – no longer being carried up into the attic each night, past those eerie gas masks that hung in a line on the faded floral wall, past Granddad’s big black police cape and hat that hung on a hook at the top of the stairs (I always thought it resembled some kind of giant bat) – No more bagpipe and one string fiddle recitals in front of the huge, black cast iron fire place, as the kettle joined in spitting onto the hot coals. 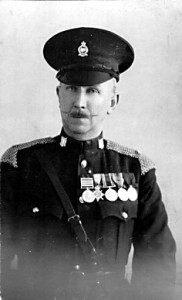 My grandfather Frame was in the Northumberland Yeomanry Hussars and fought in South Africa during the Boer War. In this photograph he also has a trio of medals for the Great War, these were colloquially known as “Pip, Squeak & Wilfred”. The medal on the end is probably for a Long Service & Good Conduct. Exceptionally nice group! – His medals were presented to him by Queen Victoria who had noticed his straight, upright physique and on one occasion asked him several times if he wore a corset?

My father had returned from the Merchant Navy to attempt the role of husband, father and painter and decorator instead of ship’s cook. He was a shortish, dark haired man with glasses, and a twisted arm that he could never straighten due to some accident aboard a ship (or maybe jumping ship?) which he didn’t take kindly to talking about. He didn’t seem to take kindly to having a son either – I was an unwanted appendage in his eyes.

I have only two early memories of my father. The first one was of this huge package he’d brought home for me, which I spent forever opening, layer after layer of wrapping paper, box inside box, parcel inside box, and then eventually from what had started as a present almost my own height and as wide as it was high, I ended up with a tiny lead soldier!

The second memory was of his passion for twisting my arm up my back until I screamed with pain. No, he was not like the tall proud Sergeant Major I had for a Granddad. I wonder what my poor Mother saw in him – maybe he was the last straw she clutched at after being the last one in a big family to get married and leave home. Maybe she was afraid of becoming an eternal wallflower. My mother was a tiny lady, 5ft, with red-brown hair and a freckled face that endlessly portrayed a look of love in my direction. Considering the height of my parents, and the fact that I eventually ended up at eye contact level with a fully-grown giraffe, I have often wondered how tall the milkman was! 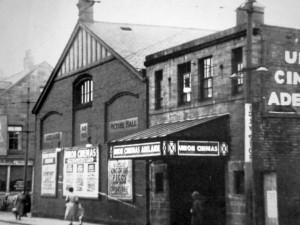 I have a vague memory of being in the Adelaide and going back to my grandma’s scratching none stop for a week – the old tin bath unhooked from a large nail on the backyard wall was placed in front of the coal fire and filled with boiling water from our soot covered kettle. I was scrutinised and scrubbed from head to toe till my flesh was pink and almost raw.

The tin bath was used by all the family and always placed on a clippy mat which had been delicately made by my grandmother. Just for those who have not heard of the expression, a clippy mat was usually made up from old rags torn into long strips and weaved together into a rug. This little gem was usually placed in front of the fireside to bring a little cosiness to the otherwise cold and bare working class kitchen floorboards.

The post war years were stark and people in general didn’t have two farthings to rub together, yet there was a great sense of hope in the air even if every other back to back terrace had its own share of bombed out buildings, rationing slips and endless warn out socks to darn. Families were short on just about everything including crockery and when the tea cups were all being used up by visitors we were handed a jam jar from which to drink our tea.

Later that year we moved to a new council estate at West Denton, taking residence at 41, Arcot Drive, a three-storey pebble dashed box. Everyone thought this was the place to be after living at Granny Frame’s cobbled terrace, which ran downhill to Armstrong Road and Scotswood and overlooked the River Tyne, in all its murky grey, ship-building splendour.

I made friends with Johnny Stox from number 67 Arcot Drive, he got the nickname Johnny “Snots” because his nose never stopped running. I remember my mother always wiping his nose for him and giving him breakfast and on one occasion buying him a second hand pair of shoe’s to give his bare feet a rest, before taking us to the bus stop and packing us off to Wallbottle Infants School. Snotsy and I would go fishing to the pit pond most evenings – I caught sticklebacks, catfish and the occasional newt. All Snotsy ever caught was a cold.

With baited breath we would sit for hours eagerly watching the bubbles come up from beneath the murky weeds and moss – with nets at the ready we were hot to pounce but in general, the tiddlers were always faster at their getaway than we were at capturing them. Occasionally other big kids would wander by and scrutinise our catch, usually wandering off unimpressed to other more exciting pass times like ‘toad pelting’ – catching toads and throwing them full force at concrete walls – the first time I witnessed this awful pass time taking place was looking on in shock horror at the older teenage brother of a local girl I was sweet on. I felt like some brainless giant should come along and throw him at a very hard surface too. 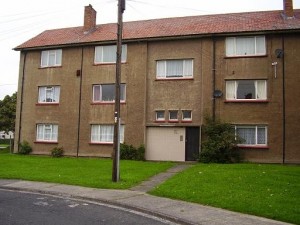 41 Arcot Drive – 1st floor left where my mother checked out!

One day the rent man seemed to take an unusual interest in my knock knees, and recommended that my mother should take me for physiotherapy at a National Health clinic, maybe they could straighten out my deformity. So religiously, she dragged me down to this kid’s clinic three nights a week, fifty-two weeks a year for what seemed a lifetime.

Not far into 1953 Granddad Frame had left us for that big bagpipe band in the sky, he was buried in full police uniform wearing his medals in a common grave on top of three other dead people from as far back as 1850; his new address was plot 583, Elswick Cemetery overlooking St.John’s Road, Newcastle upon Tyne. The whole of Newcastle’s west end police force, along with his original bag pipe band turned out to show their respect for the great man at his funeral. It would be another five years before my grandma was eventually laid to rest on top of him and his three unknown very stiff neighbours. 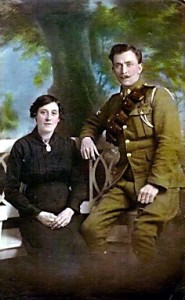 Soon my Mother, my dear Mother was ill with something very bad indeed. My father stayed in the pub and my Mother stayed in bed. Her two sisters, Hannah and Peggy would come each day to take care of my needs; my three times weekly physiotherapy sessions at the clinic and dinner for Johnny Snots and me. My mother eventually went into hospital and I went to stay with my Auntie Peggy for a while in her little cobblestone terrace flat in Fenham. My budgie ‘Beauty,’ a couple of jigsaw puzzles and a Biggles Annual followed to keep me company. I was taken to Newcastle General Hospital at visiting time to see my mother who looked completely washed out, but she insisted that I sit close to her on the hard, starched and battered looking hospital bed.

Back at auntie Peggy’s, I was presented with a new pair of grey knee-length pants, a new blazer with a school badge on the pocket that I didn’t recognize, and a tie which completed the uniform that was far too big. They were hand-me-downs again. I was told I’d grow into them. I seemed to spend my childhood growing into other people’s discarded, mothball smelling rags. I would sit on the back steps contemplating the old tin bath that hung up on the wall, knowing that I’d be sitting in front of the fire that evening being washed in the very same tub.

My auntie Peggy and uncle Bob were at least having a few weeks as parents – something they thought they would never be able to do – and I was no longer drinking tea out of jam jars with Johnny Snots. I missed Johnny, I missed a lot of things; the pit pond, running through the fields chasing rabbits… All there was around was terrace after terrace, back lane after back lane, and the greasy fish and chip shop and off licence, which collectively served lard and brown ale to the whole neighbourhood.

My Mother eventually left hospital and auntie Peggy took me back to Arcot Drive. The next couple of months were very strange from my point of view. The house seemed to be endlessly full of doctors and relations, but never much sign of my father – father still lived in the local pub! I was allowed to play out later than usual – at least I was back with my bestest mate in all of West Denton, ‘Johnny Snots’.

Then one night I was not allowed into my Mother’s bedroom to say goodnight, I was just put to bed by my auntie Peggy. Just before I dropped into a deep sleep, I felt my Mother kiss my forehead, as she had always done before she got sick. I opened my eyes expecting to see her but she wasn’t there. Still, I felt safe and slept soundly.

The next morning, I entered the living room to find my Auntie Peggy talking to some doctor type man, my father was not in the pub but sitting there crying – head in hand. Auntie Peggy quickly put her arms around me and explained that my Mother had gone with the angels last night and I wouldn’t be seeing her again, I must be a big boy and now go and live with her and uncle Bob in Fenham. I felt so lost, confused, crying, yet in some kind of cocoon, because I was the little person in a family of adults, and all I wanted was to see my mother again.