From Elvis to Ringo

From Elvis to Ringo

A few years ago when writing this I stopped my family four x four on the opposite side of the road outside the horribly ostentatious gold plated gates of Tittenhurst – I wanted to show my kids where Daddy worked in a recording studio with Beatle Ringo Starr and partied in the biggest marquee in the world with Paul McCartney, The Rolling Stones and everyone else at Zak Starkey’s twenty first birthday bash. “Who is Ringo Starr” said my seven year old daughter India “and why do you call him a Beatle?” At this juncture two heavy looking guys dressed in black with big military type portable phones marched aggressively across the road to move us swiftly on our way – how life has changed since those heady days of back then!

It was here that John Lennon played the piano in his moving Imagine video in his white drawing room. He recorded his Imagine album in the very recording studio that I was on my way to work in. In 1969 Lennon bought the house for just £145,000.

John Lennon sold Tittenhurst Park to Ringo Starr in 1971 who then sold it to the current owners in 1988 for £5 million. It is set in 76 acres of beautiful parkland and gardens and was also the setting for The Beatles’ final photo session.

As I pulled up to the main gate of Tittenhurst Park I was met with a sound not dissimilar to “The Hounds of the Baskervilles”. I tried to see over a tall wooden gate by jumping into the air like Basil Fawlty and catching a few subliminal clips of two huge German shepherds with sharp snapping teeth. “F**k that for a lark” I thought, “How on earth was I going to get past those with my arse intact?” I rang the whole selection of bells at the gate but nobody materialised except the snarling and barking bastards only some six inches away from me through heavy old pine.
Eventually I heard a voice shouting at the dogs; it was that of Zak Starkey, Ringo’s son and very exceptional drumming person himself. “Who is it?” shouted Zak. “It’s me Charley Foskett – I’m here to discuss some productions with you and your dad!” Just at that moment another car pulled up over the gravel, it was Martin Adam, a recording studio engineer that had originally made the introduction to the very nice Mr. Starr for me on my behalf.
Ringo had rang me on several occasions while I was in the middle of sessions in other studios with other clients, it was a great ego buzz getting incoming calls from a Beatle while in someone else’s recording session; They would instantly look upon me in a new light, probably wondering if I was going to slyly remix their heavy rock tracks into remakes of “Octopus’s Garden” and “Yellow Submarine”.
“Hi Zak!” shouted Martin over the gate which creaked open, I took several steps back and let Martin lead the way – hate Alsatians! “Allo mate!” exclaimed Zak as we wandered into the grounds of Tittenhurst Park. I shook hands with the very friendly young lad who looked nothing like his father.
A couple of gardeners dumped assorted flora into a large wheel barrow as Zak led us past a row of cottages where John Lennon in September 1969 put up the Swami Bhaktivedanta and a bunch of his disciples.
The Swami who later became known to the world as Srila Prabhupada, the founder of the Hari Krishna movement arrived as a house guest, no doubt to capitalise on the Beatles public profile. Three to four times a week the Swami gave public lectures in a tall, stately building at the northern end of the property about fifty yards from the main house, in which John and Yoko then lived.
The building had been formerly used as a hall for chamber music recitals until several of Srila Prabhupada’s disciples installed a small Deity altar and a podium for Srila Prabhupada. The building never really had a name, but after Srila Prabhupada’s arrival, everyone called it “the Temple”.
Three months before this recent episode in Montreal, some of the Hare Krishna devotees had sung with John and Yoko during the recording of “Give Peace a Chance.” And now they were his lodgers bringing the Hare Krishna mantra to the West.
George Harrison, a well known life long Krishna devotee, later gave the Hari Krishna movement his big manor house in Radlett, Hertfordshire, which is still their base and place of worship to this present day.It is truly amazing what one can be given for skipping around in a skirt, ringing a bell and wearing pigeon shit on your forehead. (“But don’t tell any body that I told you that!”).
As I followed Zak and Martin into the recording studio at the back of the main house I suddenly became aware that I had just set foot into one of the most important music rooms in British rock and roll history. 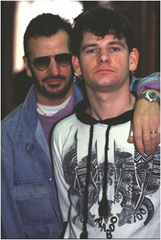 In May 1971 Phil Spector had helped John Lennon and Yoko Ono produce the recordings of “Imagine” here. I looked around a cluttered space filled with assorted drums, drum cases, guitars and amplifiers, an upright piano in a corner by the door of the control room and an old Hammond organ that looked like it hadn’t been dusted in centuries; this was the live room where Alan White, Klaus Voormann, Nicky Hopkins and one John Barham playing harmonium recorded their accompaniment for those magical simplistic piano chords to the song that stopped the western world, made people not only cry but also stop to think for a brief moment in ongoing troubled times.
Not having been a great Beatles fan I had to admit that John Lennon’s “Imagine” album and title song had had exactly the same effect on me as every other mortal in the early 1970’s.
Walking next door into that control room which had previously bore witness to the making of some of the centuries best loved pop music with Zak Starr now playing electric guitar riffs in the background just gave me a real high.
Martin Adam who was already familiar with Ringo’s control room started switching the equipment on . “I can’t help getting a blast every time I set foot in here – it’s just amazing really” exclaimed Martin.
We stretched microphone cables out of the studio over the gravel path to the Temple where both Ringo and Zak had drum kits set up for recording; the acoustics in the Temple were very ambient and gave a natural reverberation which added extra dimensions to the recorded sound, unlike the dull and dampened cardboard box like sound of the 1970’s recordings. Zak sound checked the kit as Martin and I tweaked the equalisation on the mixing console back in the studio control room, communicating with him through talk back via his headphones we balanced out the volume of the individual drums and cymbals. 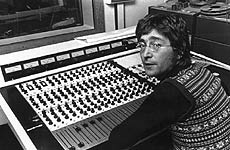 John at his mixing board in his Tittenhurst Park studio

I sat down on an old battered chesterfield on a riser slightly higher than the main floor area; as I was contemplating just how much Beatle action this old couch had seen over the years a door to my left opened from the main house kitchen and in walked Ringo Starr. “Hi Ritchie!” said Martin momentarily glancing up from the mixer. Ringo came over and shook my hand exclaiming “You must be Charley Foskett then! Nice to meet you – Okay Doky! Would any body like a cup of coffee or tea?” Now at that moment in time you could have blown me over with a feather being personally served tea, coffee and a slice of toast by a Beatle – I became an instant fan!

‘So have you got a band to take this gig out on the road?’ asked Ringo – ‘Well I have a collection of session guys who are available from time to time to record for me but I haven’t contemplated doing live gigs with it’ I replied, feeling like I may have missed a trick here. ‘I’ll play drums for you’ said Zak – ‘You couldn’t find a better player’ said Ringo of his son. ‘How about both of you playing?’ I cheekily enquired. ‘I’ll be very happy to do what I can – Barbara and I are going off to the States on holiday soon so I’ll see if I can fit in somewhere when I get back’.

I now couldn’t stop myself thinking about the possibility of playing bass in a band with both Ringo Starr and Zak playing drums – how many bass players worldwide dreamed of playing alongside a Beatle in their band. Life’s twists and turns never fail to surprise and there were to be many more surprises in the way of music sessions, with both Zak and his father, my new beat maker and Beatle friend.