It was eventually suggested by some visionary that we should record an E. P. and go to London to gig. We couldn’t fail! After all, there were no other groups that were covering such a wide range of material. We had to hit with something – if we didn’t make it as Georgie Fame and the Blue Flames, we could make it as the new Kenny Ball’s Jazzmen clones, or Geno Washington’s next ‘Ram Jam Band! 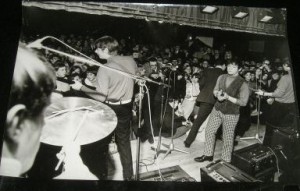 The Animals at the Mayfair Ballroom – 1965

The Tenth Avenue All Stars E. P. was made on a local label called ‘Impulse Records.’ It featured a Tamla Motown type track, a Dixieland Jazz track which sounded like a good contender for the soundtrack of a Betty Boop cartoon, a Blues Rock number, and ‘The Girl From Ipanema,’ – what a jumble! Alan Hull of Lindisfarne wanted us to back him instead of ‘Brethren,’ his early band. Peter Grant wanted to sign us up. We were in big demand. We had to go to London to try our luck at doing something – none of us were quite sure what. A week later, eight of us were packed into a little Ford Thames van with our instruments and heading south down the A. 1.

1967 was a hot summer, you could fry an egg on the engine cover, so we picked straws for whoever was unfortunate enough to have to sit on it to the next service station. After driving the length of the M1 motorway, we eventually found our way to London’s West End and Denmark Street. Tin Pan Alley, as it was known, boasted dozens of music publishers, music shops and music management companies. We secured a showcase gig at the ‘White Lion,’ Putney, that very night. No fee, not even expenses, but we might get a free drink between the eight of us. Gluttons for punishment and eager to please, we found our way through the big city to Chelsea.

The Kings Road was buzzing with life and style. Our eyes nearly popped out of our heads at the sight of dozens of mini-skirted girls with legs longer than a team of race horses, their eyes blackened heavily with eye liner and mascara and each one sporting false eyelashes which upon blinking resembled a pair of Venus Flytraps snapping open and shut. All hairstyles were either long, flat and parted in the middle or puffed out, backcombed and looking like an explosion in a mattress factory. Every other girl wore a pair of white knee-length boots, zipped up the side or laced up the front.

The guys wore hipsters, which hung there at half-mast exposing white-socked ankles, which disappeared into light tan suede desert boots. If they weren’t gliding in and out of the many Chelsea Boutiques, they zoomed back and forth on Lambretta motor scooters or behind the wheels of Triumph Herald convertibles.

The price of being hip in the sixties wasn’t always cheap, especially in Chelsea. The ‘White Lion,’ Putney didn’t quite have the same air about it. The smelly first floor room overlooking the bottom of Putney High Street was not quite this big time venue we had all dreamed of. The girl on the door of this hellhole wore the most sullen mask I’d seen in a long time and moaned with a broad East End accent.

There were two other bands on the same bill, obviously playing for the other two free drinks. What a shit-house situation – we were all as green as grass! Midnight came and we packed our gear into the old Thames van and found a car park to sleep in. We were all exhausted. The following morning we washed in the men’s room at Putney station. We may have been roughing it, I thought, but at least we could go back to Tyneside and say, “We giggled down London, mate!” What a bunch of naïve, stupid (perhaps somewhat loveable) idiots we were! 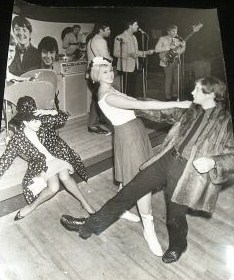 Back home in Hamilton Street, life wasn’t happening quite at the same pace as rock ‘n’ roll, in fact, nothing much was happening at all. My Uncle Bob was taking a lot of time off work to care for my Auntie Peggy, who was now ill and spending all of her time in bed. This had been going on for six months and I had been too busy dreaming of having my name in lights to see that she was not just ill, but seriously heading towards checkout time.

I managed to anchor myself enough to help tend to some of her needs, in order that my Uncle could do the odd day on the building site. So he could hold the job down and bring a couple of quid home, it would help pay for the nurse. Auntie Peggy weighed something under six stone and could not climb out of bed to visit the W. C. at the bottom of the yard.

We fixed up a commode in the cupboard under the stairs, and I had to carry her from the bed and keep her upright on the commode whilst she prayed to be able to do the impossible. I made her tomato soup but she couldn’t keep anything down longer than five minutes. She kept saying, “I’ve had my chips, Charles.” I can still hear her saying those words.

It was 1am on a Wednesday morning some three months later. I had just returned from seeing Greta. My Uncle Bob stood at the bedroom with tears streaming down his face. “Your Auntie Peggy is dying, Charles,” he said. My immediate response was, “Don’t be stupid!” Why did I say that to him? Because I just didn’t want to accept the fact that we were going to lose her.

I put my head around the door to see my Auntie Peggy lying in bed, asleep, breathing a succession of short pants. Then, two minutes later, she stopped. She just lay there, motionless, quiet. Uncle Bob stood frozen to the spot, crying – I burst into tears too. We should have been able to hold each other just for a moment, just for the comfort of a pair of loving arms, but we had never been a physical family.

The third sister, Auntie Hannah, came the following day with some thick, white wool, fisherman’s socks to put on Auntie Peggy’s feet. She shouted for me to give her a hand in the bedroom, it took a lot of strength to get me into that room. “It’s alright Charles, it’s only your Auntie Peggy,” said Auntie Hannah in a matter-of-fact tone. She lifted up the sheet off Auntie Peggy’s feet. “Now, what I want you to do is lift your Auntie Peggy’s feet up whilst I slip the socks on.” This was a total freak out time. A seventeen-year-old boy, lifting up his beloved Aunt who had become totally rigormortisised! She felt like a thin 5’10”, length of cold brittle balsa wood. “Why are you putting socks on her?” I questioned. Auntie Hannah just mumbled something as my uncle Bob entered the room. “That’ll do it.” She said, and pulled the sheet back down over my Auntie Peggy’s dead feet.