I didn’t know it but I was about to co-produced tracks with Paul and Linda McCartney, write songs for Kim Wilde, Bonnie Tyler, Elkie Brooks, Fish from Marillion and produce Elvis Costello and Loudon Wainright.
Artists just kept on coming my way and I somehow managed to stay on my feet and remain compos mentis even though I was only getting around five hours sleep and less each night.
I was spending more and more time producing artists in every top studio in town and had to eventually split from my two Off Beat Music partners in Hammersmith; they still believed I should be composing music for television and radio despite all the top flight action I had scored through hard graft and yelling at the top of my voice to anyone who would listen to what I had planned.

I was working an all nighter in Abbey Road studios – I was up in the penthouse and at around 3.am the internal phone rang. I thought it was the young kid and tape op from down stairs again – he had been supplying me with coffees every hour to keep me awake. When I picked up a voice said ‘Hello is that Charley Foskett?’ to which I replied ‘Yes! Piss off and let me get on with my work, I’m on a deadline here!’ ‘I’ve had enough coffee to last me all week’ – I then hung up and continued working.

Two minutes later the phone rang again and a voice said ‘Hello Charley, it’s Paul here’ to which I replied ‘Paul who?’ and the voice said ‘Paul McCartney’ – and I yelled back ‘F**k Off’ and hung up the receiver again. I thought about running down stairs and tying up, blind folding and gagging the young tape op then locking him in the basement for the rest of the night.

I had no sooner sat down and rewound the tape and the phone rang again – by this time I was really pissed off and just took it off the receiver and left it hanging there. I could hear a little voice talking away as I got on with my work.
I picked it up again after running the tape for a couple of minutes and there he was still on the line. ‘Hello Charley, It’s Paul McCartney here’ to which I replied ‘Yes of course you are but your scouse accent is rubbish!’ I had almost turned into Basil Fawlty before the penny dropped – his accent was perfect Liverpudlian and it was Macca ringing me in the middle of the night. ‘You’ve really gone and done it haven’t you’, said the one of great Hofner violin bass playing. ‘Oh shit! – Sorry! I thought you were the guy down stairs making the coffee’ I mumbled nervously. On reflection, I wondered what kind of pranks the Beatles had got themselves up to in their day in that very same recording studio?

We laughed and he invited me to ‘discuss stuff’ the following week after Zak Starkey’s 21st birthday bash at Tittenhurst Park. He had written a song for me called ‘Simple as that’ and he was sending his guy over with the rough mixes for me to checkout.

The double album and single ‘It’s a Live-In World’ was due for Christmas release 1986 and featured pretty much everybody that was a big name at that time. I had artists flying in from America, taking days out from their tour schedules to get in on the action. Organising it was an administrational nightmare but with the help of my p.a. and various EMI departments (who would run in the opposite direction at the sight of me coming) we kept on top of it.

It always becomes a lot easier when you have a major label support behind you – every Tom, Dick and Harry wants to jump on your ride to big up their own failing careers and why not – I got a million quid’s worth of free publicity including prime time television – BBC and ITV news, MTV and the whole shebang. We, without doubt were going to have the biggest number one Christmas hit that would equal Band Aid without problem. 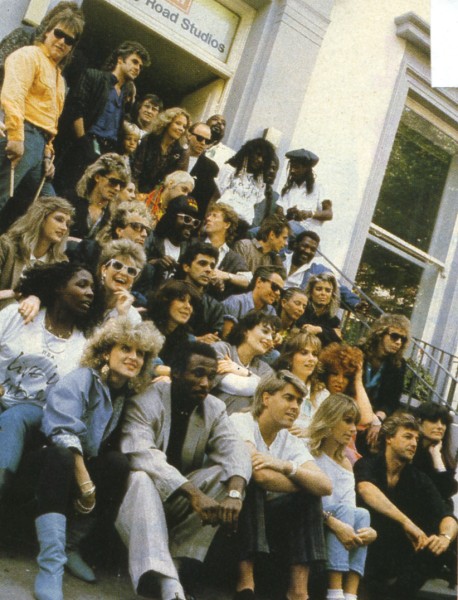 Some of the artists from ‘It’s a Live in World’ super session pour down the front steps of Abbey Road studios to have their photographs taken.

The day following the McCartney phone call I couldn’t keep my eyelids open and arrived early afternoon at CTS studios in Wembley – CTS was one of the biggest recording studios catering for film soundtracks – I was introduced to one of the leading composer and music programmers there by the name of Brian Gascoigne who turned out to be television presenter Bamba Gascoigne’s younger brother – Brian was a generous type of guy and lent us a couple of his keyboards and sound effects units for the night and would get them back off us the following morning when he showed up back at the studio. Roz Graham had arranged to get this studio downtime for me to make a start on a track which was written by two old Geordie musician friends Colin Gibson and Kenny Craddock.

Colin and Kenny were huge fans of ‘The Goon Show’ and wanted me to get Spike Milligan to sing on a song they had especially written for him called ‘Naughty Atom Bomb’ – Lyrically perfect about wearing dampened tea towels on one’s head during a world war two bomb raid ‘Naughty Atom Bomb’ was tailor made for Milligan but I just couldn’t seem to persuade him to go for it. When I visited him in Notting Hill Gate, all I ever got was endless chat about how he was on a one man mission to save all the whales in the world, which was very admirable and it must be said that I do personally love those big splashy fishies, but the anti heroin project was also important too. Spike just couldn’t see it – or wouldn’t see it.

Roz called me early evening at CTS to tell me to get to her apartment early the following morning as Bill Oddie was coming over to discuss doing the Spike part of ‘Naughty Atom Bomb’ and she thought he would be perfect – we joked how he could also throw in some bird noises too. I sat there in CTS with lovely man and keyboardist Tommy Ayre – Tommy was the musical director with ‘Wham’ and also renowned Hammond organ player on the fantastic ‘With a little help from my Friends’ with Joe Cocker.

I had been told by two Beatles (Ringo and Macca) that I had written one great big classic hit song, this fed my ego somewhat and meant a lot – I had also been offered a top job at the home office as David Mellor’s right hand man on the government’s proposed 1987 anti drug campaign. Mellor took me out for dinner and schmoozed me no end!

It was at this point I should have smelled a rat – and one gigantic rat at that!
I turned Mellor’s job offer down favouring popular music over politics and one week later EMI received a telephone call from the home office ordering them to ditch the release of ‘It’s a Live-In-World. They were proposing to dump twenty months of my hard labours in the blink of an eye, none of us could understand it; my endless pushing and pulling of hundreds of great talented people and their managements and agents and most of all my own love of achieving something really worthwhile in a self gratifying industry.
Cliff Richard, Paul McCartney, Elvis Costello and myself complained like hell at the front door of the Home Office, we rang Parliament – The BBC were rendered totally helpless and were also banned from giving ‘It’s a Live-in World’ any airplay what-so-ever. They were forbidden from even covering our endeavours to campaign for the news – Nothing! Zilch!

Why?
I got in the way of their own anti heroin campaign and it was looking like ‘It’s a Live-In-World’ may have proved much more effective than their own multi million pound effort which was spent on those huge hording adverts that appeared throughout the UK in January 1987 – Kids with dark rings under their eyes looking gray and washed out; giant syringes dripping blood looked down onto every other street corner for a couple of months.
I could see what they were getting at by those images but could not understand why we couldn’t have joined forces with them on the same campaign. The answer was obvious – ‘Ego’ – not knowingly I had bashed their egos in a massive way, they couldn’t have been seen to have spent so much of the countries money on cleaning up Great Britain from heroin abuse, then along comes this Geordie musician and makes much more noise about the problem having not spent one penny on funding his own plan of action.
The carpet had been pulled from right under our feet and we were well and truly buried without trace. ‘It’s a Live-In-World’ was wiped out.
In hindsight I should have created this gig for Macmillan Cancer support – Today I am a cancer survivor but still battling! www.singitback.net No one would have, could have argued!